Coaches I have used

Why you can’t roll, and why the internet can’t solve the problem for you

Why the way to learn or improve your kayak roll is to stop trying to roll in the first place, and to ignore random people on the internet! Of which I am one.

A common complaint is that people have either lost their roll, or just can’t get it. But the internet is possibly the worst place in the world to get advice (ironically given this blog’s existence!) Usual caveat with this blog, if you don’t like it, write your own!

I see it all the time, paddlers asking for rolling advice on internet forums or social media groups. Everyone has an opinion on what the person in question should be doing, mostly missing the real reason for the roll failure in the first place.

Here’s an example. The paddler’s blade is clearly diving sharply towards the bottom of the river and they are lifting their head, so they are advised to stop lifting their head, and to feather the paddle in a different way to stop it diving. Fair enough at a glance, but it doesn’t tackle the real cause of why that person’s head is lifting, or why the paddle is diving.

The lifting of the head is usually a resulting symptom of those problems rather than being the outright cause of a failed roll in and on itself.

But the real questions to ask are why does someone not perform the waist and body rotation with the paddle being connected to this movement correctly? Why do they get the feather wrong? A lot of these problems are due to the way the roll is taught in the first place. 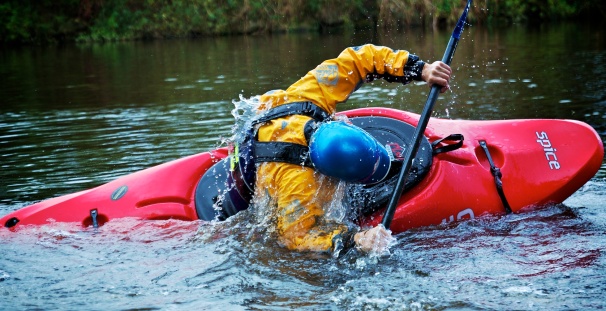 I’m predicting that this photo of me from 8 years ago just after I started getting my roll more reliable, while in a friends boat that was two sizes too big and had absolutely no outfitting to fit me at all will have internet commentators giving me lots of advice on how to improve my roll by not punching my hands etc. It was 8 frickin’ years ago!

Focussing on the wrong things

The reality is that a good roll, if you look at any freestyle paddler with a number of years experience, can come from any position. And that’s because all rolls, whether it’s a C to C or the most fancy traditional Eskimo roll, have the same core components that bring the boat up.

One reason that the roll is often taught in such a way that paddlers fail to understand what really brings the boat up, is the desire to learn as fast as possible. Everyone wants the roll quickly. The irony is that if things were slowed down and much more groundwork was done first, the paddler would progress much faster later on. If a paddler understands what really brings the boat up, and I mean really understands, they would realise that you could in fact have a completely vertical paddle in the water and still come up. It would just be a bit more difficult. But for the purposes of today, let’s talk in terms of everything working together to make an efficient roll.

In kung fu we learn the basics, such as footwork, and we have to be very precise. In Wing Chun, which has a lot of parallels with kayaking because much of it works off the feeling of tactile pressure, we do hand drills that condition a response. Until we get very good at these things we are not taught the next step, because if we can’t understand the foundation movements, there’s no way in hell we can apply things effectively ‘live’.

If there is one thing that paddle diving highlights, it is a lack of paddle dexterity, and a lack of awareness of where the body is, and what it should actually be doing.

Instead, forget about rolling up completely. You need to build a foundation, and that means going over and hanging out upside down while moving the paddle around in all positions gently. And also hanging out upside down, and instead of trying to roll, build up the sweep movement until you can do it without resistance. Importantly don’t just learn how to sweep the paddle, but put a particular focus on moving the paddle with your torso, NOT your arms. But NO trying to actually roll. Forget it. Do not even entertain the idea. Because as soon as you try to roll you’ll screw it up and go back to old habits. You need to spend a long time building new habits!

Do I mean do this for about five minutes and then start trying to roll again? NO!

Again this is an issue I come up against a lot. I show some people something to practice and to get used to certain movements, or get them to try hanging out underwater and get used to moving the paddle about and learning their orientation. They then do this for a minute or so, get bored and then start doing something else ‘more interesting’.

Okay, I get it, it’s supposed to be fun, and nobody likes practice exercises because they don’t get to see instant results with them. But if a flawless roll is your aim (and my own is not flawless by the way before you ask), then you need to put the work in. And that means holding off the fun part of trying to actually roll up for a bit, and instead spending a good number of pool sessions, or a good portion of them, doing such exercises, along with others such as dry land rolling (and dry land paddle sweeping), and body/waist rotation whilst holding onto the side of the pool so you can actually understand the movement. This is particularly important if you are struggling to learn to roll. But whatever you do, DO NOT try to roll!

A couple of minutes of practice before getting bored and trying to fully roll again just won’t cut it I’m afraid. You need to spend a lot of time doing these practice movements and exercises. And by the way, if you are analysing what you are doing as you perform the movements, practicing them is anything but boring. They are only boring if you blithely perform the movements without looking at what is happening, hoping the exercises will have an effect. You need to actually understand the movements and why you are doing them.

Unfortunately not many people have this sort of tenacity, but if you can break away from trying to rush to the finish line and build up a really solid foundation for the roll, you’ll progress much faster later on, and have a more reliable roll. Doing such exercises also has another benefit. Self diagnosis. It’s one thing to have a coach looking at what you are doing, but you’ll progress much better if you can self diagnose as well. You’ll be able to understand the hints given to you by the coach much better, or sometimes know the real mistake you made before the coach did. The ability to self diagnose is important, and forces you to understand the movements much better than relying on someone else to tell you.

You’ll also be able to look at what other people do and relate back to yourself. Watch people who roll well a lot and look closely at what they are doing. Watch their body, look at where the core of their roll is.

That’s enough from me. Below are three of the best roll instructional videos I have seen, produced by Glenmore Lodge and featuring the always excellent Dave Rossetter. It’s excellent because it spends time showing you the foundation of what makes the roll actually work. <Gigantic humblebrag alert> I wish I had this when I was learning, but luckily this video backed up what I had to discover for myself. So at least I knew I wasn’t talking proverbial bollocks.

6 comments on “Why you can’t roll, and why the internet can’t solve the problem for you”